In the Name of Beauty: 3 Inch Golden Lotus Feet 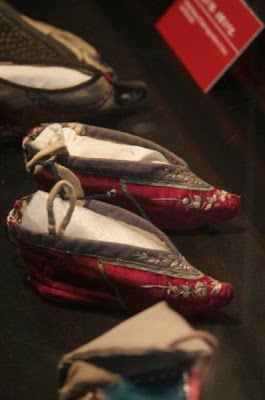 Today I am going to rant a little about the pain women in China had to endure for about a thousand year in the name of beauty and feminine charm. I often joke with gal pals that beauty is pain whenever our ultra high heels bother us after an hour or two. In the case for women with bound feet, beauty literally meant pain and sometimes death if infection occurred anytime during the 2 year binding process. The most desirable size was 3 inches. Recently I finished reading a couple of books, Peony in Love and Snow Flower and The Secret Fan by Lisa See which had me crying for the women who had to have their feet bind because they became more valuable in the eyes of society and their own family.
Men of old China found these tiny feet alluring. Due to uneven weight distribution, women walked in this swaying fashion which was considered charming and the epitome of feminism. Only women from the richest family had their feet bound which was another way to display family wealth. Although men found women in tiny Golden Lotus shoes desirable, they didn't really want to see their women's feet without all the wrapping and the lovely Golden Lotus shoes because the reality was those feet were deformed and smelly. Perhaps if those men had to look at them daily, this horrible tradition would cease a lot sooner.
*image of red Golden Lotus slipper via travelblog.org 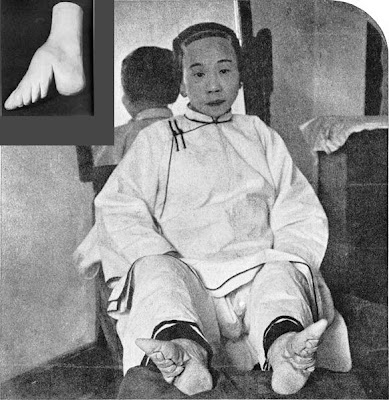 Young girls would begin their tortuous foot binding process around age of 4 or 5 years old. Their 4 little toes would break and bend toward the heel, leaving only the big toe for support. Arches were also broken to create a foot similar to a lotus bud. Infection and death were not uncommon among these girls. Usually mothers, a female family member or a professional foot binder would perform this deed. In wealthier households, clothe bindings were changed daily and became tighter progressively to achieve smaller feet. In the less wealthy family, bindings were changed 2 to 4 times weekly. Looking at the woman in the above picture, how can anyone do that to a child as they screamed in pain?
*above showed an image of a caste of a Golden Lotus foot (image via hmc.org)

*Above is a X-ray comparison between a healthy foot vs. a Golden Lotus foot (image via Wikipedia)
I for one am very glad this horrible tradition is no longer in practice. I am thankful as gals we are allowed and encouraged to pursue our dreams and goals. Next time, when I joke beauty is pain, I will remember all the gals who have lived in pain all their lives because of tradition and thank my luck star I am not one of them. What other tortuous traditions are out there in the name of beauty?
Posted by Angela