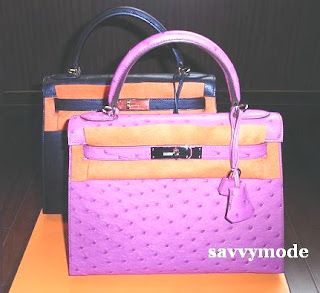 Before the Birkin rage, Hermes Kelly is much coveted by savvy fashionable gals. Kelly bags are much more lady-like and structured comparing to the tote-like Birkin which can become super heavy after a gal put all her goodies inside. I weighted a few Birkins, on average each weighted about 8 pounds. So what is a gal to do when facing an ostrich Kelly in black and fuchsia? According to a savvy family member, she buys both! The black is more conservative and such a classic but the fuchsia Kelly just pops and is so much fun. For exotic bags, I think it is much savvier to buy color instead of black to really showoff the texture. 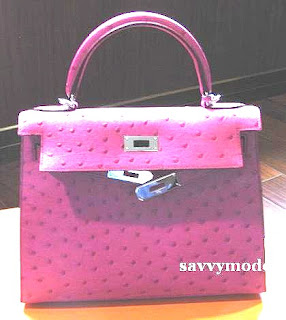 However, if money is not an issue, I think a gal should have a black Kelly as well. Hermes Kelly looks great dressy with suits/tailor dresses or casual with tees and jeans. To keep the bag casual, a gal can wear the bag with straps open and close the flap with the twist lock which allows easy access to things inside. 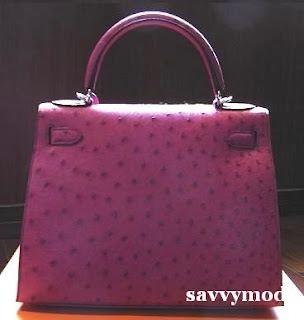 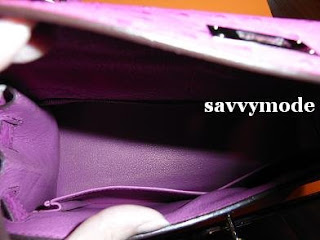 Gal pal usually wears Kelly diagonally like a messenger because she has to carry a tot. If I buy a Kelly bag, I will buy the 32 cm instead of 28 cm. These 28 cm Hermes Kelly ostrich bags will cost about $14,000 each. Ouch!!! A normal Kelly bag starts at about mid $6000 last year. Which do you prefer, black or color?
Posted by Angela